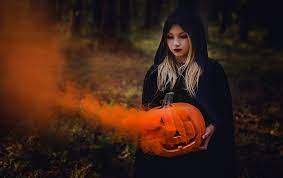 The Celtic festival of Samhain was typically known as a time when people would light bonfires and wear costumes to ward off ghosts.

The evening before was known as All Hallows Eve, and later Halloween. Over time, Hallows Eve evolved into a fun day of activities where people would carve pumpkins (jack o lanterns) and they would dress up in costumes.

The Celts who lived some 2,000 years ago believed that on the eve of November1st the ghosts of their dead returned to the earth plane, and the veil between worlds became blurred.

As a medium, I know, that we have access to the other side. If this is the day where it is an easier task, I?m all in.